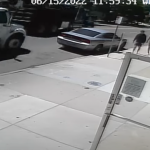 These two pedestrians were really lucky not to end up run over by a car. Because yes, while they were strolling quietly on the sidewalk, a truck arrived in front of them.

Finally, facing them not really but rather on the roadway next to their sidewalk. Only here, thethe truck driver was visibly distracted by someone or something to the point of not looking straight ahead.

He then hit a car parked on the side of the road. The shock was not extremely violent, but sufficient all the same to send said car in the direction of the two passers-by!

It was really close that this bucket truck does not send a car on these two pedestrians. Fortunately, the vehicle grazed them because at this distance, they wouldn’t have had time to dodge…

You can also see the two men thank heaven at the end of the video. Whether they believed in a god or not, it was obviously not their time.