New Peugeot 408 (2022) – In agony for more than 15 years of SUV hegemony, the sedan category tries to reinvent itself by appropriating certain codes of these famous crossovers. After the Citroen C5 Xthe Stellantis group is doing it again under the Peugeot label.

In the first months of his life, in 2018, we believed hard as iron in the success of the current Peugeot 508 which took a 180° turn, compared to its predecessor, by adopting the radical silhouette of a 4-door coupé carried by an aggressive design. But, past the novelty effect, its sales scores quickly run out of steamleaving the 3008 and other 5008 to reap the laurels in the field of high-end generalists. A disavowal for which the Lion had perhaps been prepared, he who began the genesis of the 408 project a few months before the commercial launch of his big sister.

The comeback of sedans?

The will toinject a hint of SUV DNA into “Daddy’s” sedansto reverse their downward trend, is therefore not new. However, for the French manufacturer, it was a question ofavoid the pitfall of Volvo which, in 2015, clumsily transformed its S60 sedan into an adventurer to give it the Cross Country badge which, until now, was the joy of Swedish station wagons. History will remember thatit is not enough to enhance a brave 3-volume sedan and to protect its sills to re-arouse the interest of a large public thirsty for SUVs.

Before Peugeot, Citroën understood this well by allowing itself the time to refine the design of the replacement for the C5, which disappeared from the Chevrons catalog in 2019, to give birth to a digressive C5 X, halfway between sedan, station wagon and fastback. Of these three categories, the new 408 avoids the second to distinguish itself from its chaste cousin, advocating a much more dynamic attitudewhose slow flag fall sharp with a scowling trunk is reminiscent of the stern of a certain Audi A7 Sportback. 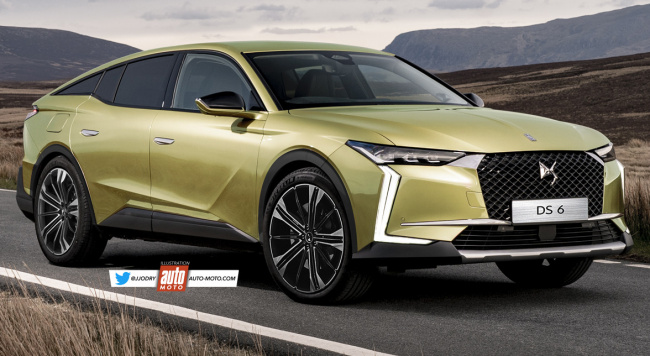 From all angles, the Sochaux seems to have been shaped with a billhook, even if it means passing for a character in the eyes of sensitive souls. No matter, this 408 is imposing and hopes to abuse its finery to win back customers submerged by the SUV wave for too many years. And although she borrows their high ground clearancesurrounded by imposing raw plastic protections, it clearly claims to be a sedanholding its overall height to 1.48m, just two centimeters longer than a Renault Talisman. Far from the average of 1.65 m where compact SUVs culminate.

We are convinced of this by learning that it is closely derived from the last installment of 308the compact from which it inherits the bonnet, the front and rear lights, and even the dashboard. The emancipation of the 408 notably passes through thewidening of the tracks which, on the way, allows it to accommodate large wheels of 720 mm in diameterwhatever the size of the rims (up to 20”). A generous ride which largely contributes to the elevation of its plate, in addition to specific adjustments of the running gear.

To legitimize its surname 408, synonymous with moving upmarket, it lengthens intensely compared to its little sister, only 4.37 m long. To reach the pretty dimension of 4.69 mhe had to resort to the wheelbase of the 308 SW break (2.73 m) enhanced by an additional 5 cm to calibrate very exactly on the length between the two axles of the 508 (2.79 m). But thanks to its slightly elevated stance, the 408 outclasses it in terms of legroom, rear space, as well as boot volume, 522 l strongi.e. 35 l better, not far from the capacity of the 508 station wagon (530 l).

The intense stretching of the 308’s platform has forced the 408 to revise the design of the doors, while the widening of its tracks gives it the benefit ofnew front fenders, more hollowed out to accommodate the headlights and light signatures of the compact. All around, grille and shield also benefit from a new design to beef up its game. But it is obviously the stern which takes on a new character with fully dedicated bodywork elements. The fastback profile which determines it was not selected by chance, because considered ideal in terms of aerodynamicsaccording to its developers who are pleased with a coefficient of penetration in the air amounting to 0.28. A Cx that does no better than the 308 5-door, and even worse than that of the eponymous station wagon (0.277). A slight counter-performance that she particularly pays for with her increased frontal surface, inherent in its elevation.

Anxious to contain its CO2 emissions, it retains onlya modest 100% internal combustion engine of 130 hprunning on lead-free, as well as two plug-in hybrid blocks that combine 180 and 225 hp. In the longer term, we hope for a burst of pride on its part to honor its feline plastic and its slightly premium positioning. There is no shortage of more toned PHEV variants in Stellantis’ organ bank which offers 250 hp on board the DS 9or 300 hp under the hood of the 3008. And why not imagine, enthroned at the top of the range, a high-performance 408 stamped Peugeot Sport Engineered, inheriting the 360 ​​hp of the 508 of the same barrel? Nothing is less sure. Conversely, it is noted that 2024 will witness the arrival of a 100% electric e-408 to add a new virtuous string to his bow. An ambitious program which, we hope, will bring some SUV drivers back down to earth to once again taste the forgotten pleasures of driving a sedan.

Marketed at the end of 2022, or even at the very beginning of 2023the new Peugeot 408 will be one of the stars of the 2022 Paris Motor Show next October. An event during which it will probably reveal its prices, with an entry-level estimated at over €30,000.

Future DS6: a raised sedan to counter the Peugeot 408?

TEST Peugeot 5008 BlueHDi 130 EAT8: what is the small diesel engine of the 7-seater SUV worth?