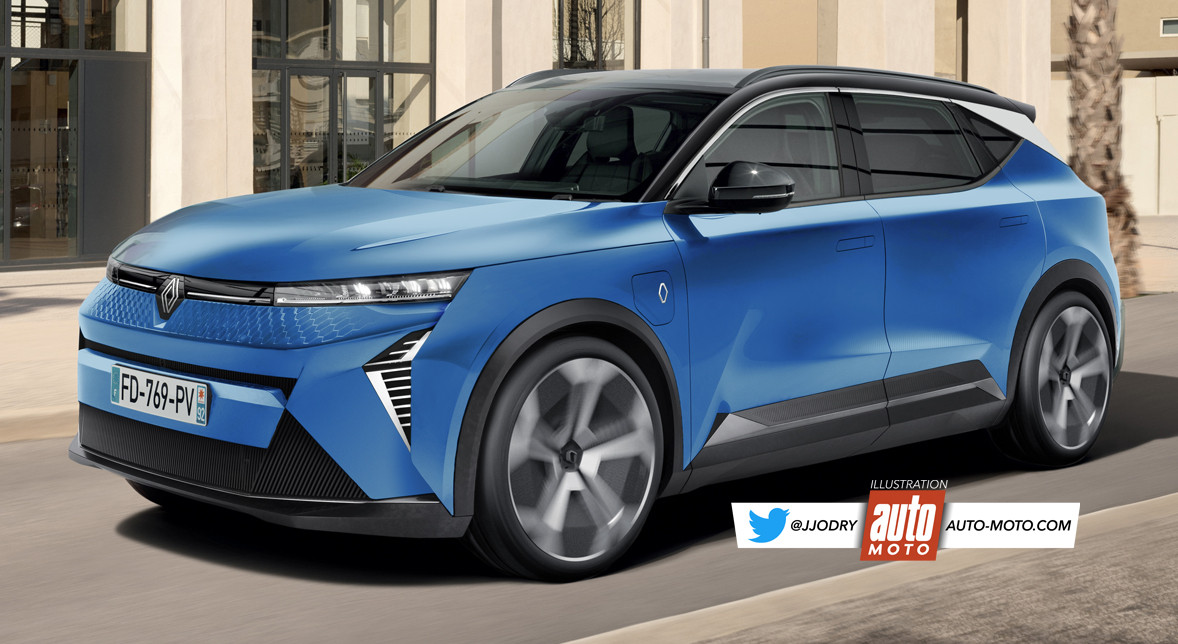 Just revealed in the form of a concept car, the 2024 Renault Scenic is illustrated in its final appearance via our exclusive illustrations.

Future electric Renault Scenic (2024) – Going from the concept car stage to that of the series, the newcomer will be forced to rationalize its technical and stylistic solutions to keep prices competitive. From Scenic Vision to production modelAuto-Moto offers its vision of the future 100% electric Renault Scenic.

After having rubbed shoulders with the Volkswagen ID.3 with the Mégane E-Tech Electrique, Renault is giving itself two more years to refine the one that intends to stand up to the ID.4among other competitors. Longer than its little sister by about 30 cm (4.49m), and therefore heavier, it should discard the entry-level engine (130 hp) to retain only its 220 hp variantmore in tune with his family claims. But it will also have to offer an unprecedented intermediate power level in order to guarantee a floor price against the modest 148 hp block of the Volkswagen SUV.

The Volkswagen ID.4 in the viewfinder

On the battery capacity side, between the 40 and 60 kWh currently offered by the Mégane, a 50 kWh variant would also be indicated to counter that of the German’s entry-level which, with 52 kWh, promises to reach up to 345 km. But the electric Renault Scenic will also have to expand its range upwards to block the way to the most generous versions in autonomy of the ID.4 (520 km). For this purpose, its CMF-EV platformcommonly developed with Nissan, will open the doors to the Ariya organ bankits Japanese cousin 10 cm longer (4.59 m), which is justly proud ofa 90 kWh battery promising to travel 520 km. On the Renault model, it could power the178 kW (242 hp) electric motor already boasting the Ariyaor even 225 kW (306 hp) in four-wheel drive.

More modular than the concept car?

On board, the future Renault Scenic could make up for it in terms of modularity, compared to the concept car. It would be easy for him, in particular thanks to its flat floor, to opt for a combination of three independent armchairs mounted on slides, in the second rowwhile a huge storage space between the front passengers is expected, provided that the comfortable dimension of 1.90 m wide is renewed in production. It would be the least of things to pretend worthily honoring the memory of the Scenic dynasty, queen of modularity. And while it will forgo the unibody profile of its elders for good, the optimization of the electric platform returning the wheels to all four corners will guarantee it a class-leading wheelbase length, for the benefit of legroom. If it remains faithful to the 2.83 m observed in the study, it will be able to boast ofa measurement between the two axles greater than that of the current 7-seater Grand Scenic which nevertheless extends over an additional 14 cm (4.63 m) in total.

Facing the driver, we bet that the ultra-stripped dashboard of the showcar will give way to the recent digital duo OpenRinaugurated by the Mégane, in an even improved configuration. Finally, from an exterior point of view, the new Renault Scenic will swap its antagonistic openings for classic doorshowever fitted with the retractable handles of the electric Mégane, when the rearview camera will probably go by the wayside. On the other hand, the large 21” wheels could survive it, taking care, however, to settle down the design of the rims, expurgated of their dynamic shutters far too expensive to industrialize. But for the rest, the Scenic will remain broadly faithful to the facies expressed by the Vision study when the stern will focus especially on thickening its lights, too thin to pass the course of homologation.

In the end, the program of the future Renault Scenic is announced enticing, on paper. Unless his surname, already subject to controversydoes not obscure his career. But two years from its commercial expiry date, there is still time to change it. During his marketing in 2024, it will be necessary to count on an access tariff located around €40,000.