What’s black, chubby, spacious and family-friendly, and which accelerates as well as the mythical Ferrari F50 ? That’s it, there, right before your eyes, this large all-electric brick shaped like a huge peanut, called Tesla Model Y.

This phenomenal lap time does not make the Y Performance the best car in the world, but it allows us to see the evolution of the automobile over the years, and to admit that electric mobility, especially at Tesla, is reshuffling the cards and trash our references.

Upsetting our bearings and upsetting our habits even seems to be the specialty of the American brand: all you have to do is sit on board, in this cabin that is extremely refined and identical to that of the sedan. Model 3for understand that we will have to relearn everything.

Adjust the temperature, adjust the position of the steering wheel, engage the cruise control or simply start the vehicle, Everything is different of what the “installed and conventional” brands that we are all used to offer.

Different, but still simple. It’s like switching from an Android smartphone to an iPhone : once you get used to it, it can be difficult to do without it or to go back.

The set is however not perfect, without any buttons and with a single touch screen to control a multimedia system that has never lived up to its name.

In addition toNetflix, Disney+, Twitch or Spotify subscriptions to transform the passenger compartment into a living room, there are video games of all kinds and perfectly superfluous, but sometimes amusing pastimes, such as the sounds that can be associated with the horn (including the Cucaracha, of course) when you is at a standstill.

However, access to certain features while driving may seem complex or unnatural.

Furthermore, due to a lack of instrumentation behind the steering wheel, and in the absence of a head-up displayall driving information is grouped together on the left side of the screen.

Once accommodated to this atmosphere, and suitably installed despite a questionable driving position, quite high, there is only press the right pedal sharply. And boom!

The headrest swings a cleat at you and your passenger, if you have one, yells at you: the chocolate éclair he had placed on the dashboard is literally tele-transported from point A to a T-shirt.

On the meter, the speed climbs like in a supercar, but no explosion or transmission jerk is reported. Whether it’sa standing start (0 to 100 km/h in 3.7 seconds) or a cover, the Model Y Performance is hair-raising.

And even much more impressive than its potential power suggests (it is estimated at 490 hp, Tesla does not communicate on the subject). His flashes, the instantaneity of his response and its ability to deposit motorcycles impress.

But, well educated, the Californian also knows how to be docile, with a very easy and gentle dosage of the acceleratorto stay on good terms with your passengers.

For a car with an (a priori) family character, this unthinkable contrast between smoothness and brutality can seem disconcerting.

However, the Model Y Performance imperfectly hides its game: she hits badlyis as manoeuvrable as a small bus and has a real firmness of the suspensionamplified by 21-inch wheels shod with low profile tires.

Cobbled streets don’t go unnoticed, nor do manhole covers; on board, it shakes. These rims called “Überturbine”, specific to this version, are part of the specific Performance equipment, as are the small tailgate spoiler and the aluminum pedals.

This version, produced in Berlin as the Great Autonomy arrives from Chinaboosts the top speed from 217 to 250 km/h. But it ignores the Track Mode of the Model 3 Performance.

On the saloon, this device allows the disconnection of the ESP anti-skid system, improves the cooling of the electrical part and makes it possible to modulate the distribution between the two axles.

This does not make it possible to change the road behavior of this SUV, which shares about 75% of its components with the Model 3.

And when the pace increases exaggeratedly, the heavy Model Y Performance does not show not very agile nor does it do better than the others : its front axle, however hooked by its 255 mm wide tires, gradually widens the trajectory.

However, it must be abused to get there, the gear changes in curves already proving unmentionable.

If he knew everything that can be done with such a Tesla, the State would perhaps consider equipping the constabulary with it: the American hasa function called “sentinel”which makes it the dream car of the cops in hiding…

Its cameras distributed around the bodywork can be used to monitor the surroundings remotely, from a smartphoneand even to record small sequences. Handy when your neighbor is redesigning your front fender, or when your girlfriend’s ex is prowling around the Tesla.

This equipment detail illustrates a fact: a Tesla is more than a car. Exactly like an iPhone, which isn’t just for making calls…

Despite an anecdotal distribution network, the American firm knows how to take us by the feelings, with quirky but fun vehicles and, as here, very efficient. And too bad if their appearance remains rather boilerplate.

We could also have spoken to you about autonomy. But no, since it turns out to be sufficient thanks to a battery capacity estimated at 75 kWh approximately (Tesla does not provide this data) and, above all, because it depends on the Tesla’s most widespread and efficient charging network.

In short, it’s black, chubby, spacious and family-friendly, it accelerates like an F50 and it’s rather easy to recharge… 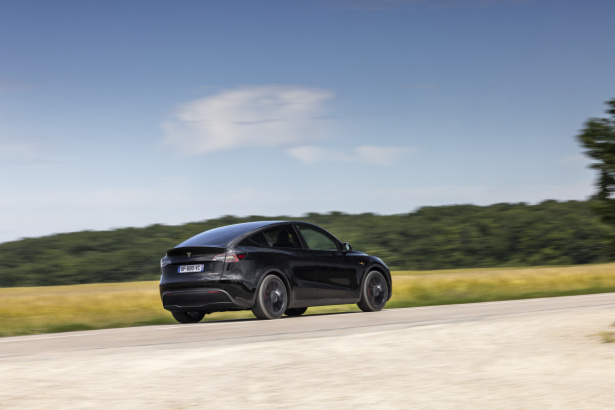 Able to seduce for its family attributes, the Y Performance can also cause love at first sight with its violent accelerations. Versatile, pleasant and endowed with a flattering price/benefits ratio, the American car suffers, however, from far too firm comfort.

In the back, the legroom seems huge. But the central seat, with a very stiff seat and backrest, is very uncomfortable.